Improving our defences against respiratory infection and flu

Respiratory infections, including COVID-19, flu, pneumonia and acute bronchitis, are one of the most significant winter pressures on the NHS. For some respiratory viruses like flu and COVID-19, vaccines can reduce your risk. But there are other steps you can take to reduce your risk as well.

They have always been – and continue to be – a focus for NIHR research, looking at different ways to reduce the risk or impact of infection, both through vaccination (where vaccines exist) and changes we can make ourselves.

A major NIHR-funded study is underway looking at whether commonly available nasal sprays, increasing exercise and reducing stress can help people get fewer and less severe respiratory infections. The team, from the University of Southampton, aims to recruit up to 15,000 participants at risk of severe respiratory infections, such as those with asthma, for example. Participants will be randomly assigned to either use a microgel nasal spray, use a saline nasal spray, receive support to become more active and reduce their stress, or simply get normal treatment for infections. Each person will follow their treatment plan for one year. The team will then assess which intervention is most effective at reducing the incidence, severity and duration of respiratory illnesses.

Taking Vitamin D supplements is now known to reduce the chance of getting a severe respiratory tract infection, but that wasn’t always the case. Although Vitamin D was known to help maintain bone, teeth and muscle health during the winter, the evidence for its impact on respiratory infections was less clear. NIHR-funded researchers were among the first to confirm the benefits of Vitamin D, by analysing the results of 25 randomised controlled trials into the supplement, involving over 11,000 people. They found that daily or weekly supplements reduced respiratory tract infections compared with a placebo: for every 20 people taking regular Vitamin D supplements, there is one less infection.

NIHR researchers are also investigating whether nitrates – found naturally in foods such as beetroot and lemon juice – can help lessen the impact of respiratory infections. The team, from the University of Nottingham, are recruiting care home residents to drink concentrated beetroot and lemon juice daily over two months. Half the residents will drink normal juice and half will have de-activated juice without nitrates. The researchers will assess levels of nitrates in participants’ saliva and urine at the start and end of the trial. They will see whether their nitrate levels have any impact on respiratory infections, including flu, common colds and COVID-19.

Currently, there is no clear evidence about which treatments are best for severe cases of flu. Although many people with the illness get better on their own without needing hospital treatment, flu can make some people seriously ill and even be life-threatening.

With record numbers of flu cases expected this winter, a major NIHR-funded study called REMAP-CAP is now looking to rapidly find effective flu treatments. The research team will enrol thousands of adults and children hospitalised with severe flu, from 150 hospitals across the UK. As a ‘platform study’ - investigating multiple different treatments - the team will be able to quickly learn from early results and ensure people receive treatments which show encouraging results as soon as possible. 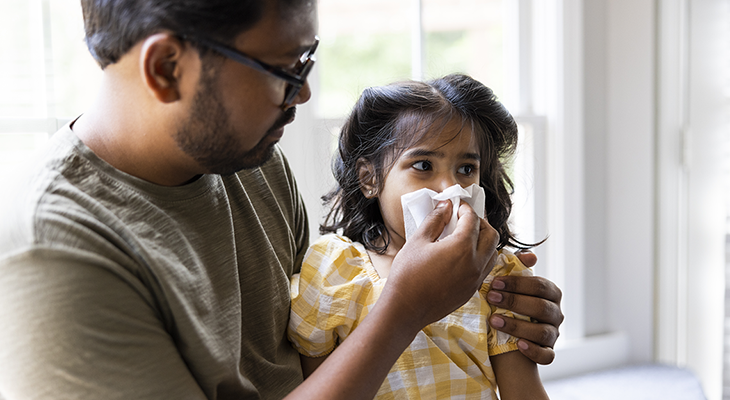 Vaccines are not available for some common respiratory infections, such as the common cold or the respiratory syncytial virus (RSV), the leading cause of severe respiratory illness in young children. The UK has been providing a flu vaccine to the over-65s since 2000, and it is now offered free of charge to other groups as well. The groups eligible for a free flu vaccine differ across the devolved nations (see the details for England, Scotland, Wales and Northern Ireland).

Most flu vaccines are administered by injection, but a vaccine in a nasal spray was first introduced across the UK in 2013 for some pre-school and primary school children. Scotland was one of the first nations to introduce it for all children aged 2-11 years old. NIHR-funded researchers from the University of Edinburgh looked at how widely the nasal vaccine was taken up and how effective it has been at reducing transmission.

The researchers compared vaccination records in 230 GP practices – a quarter of the total in Scotland – with hospital data on infections and deaths from flu, using this information to determine overall levels of infection. Their analysis showed that two-fifths of pre-school children and two-thirds of primary school pupils received the flu vaccine and that there were no significant adverse effects. As more children were vaccinated, so their risk of catching flu reduced, by 21% in 2014/15 and 58% in 2015/2016. The research confirmed that the nasal vaccine is both effective and safe in children and it is now offered to all children in that age group across the UK.

NIHR-funded researchers have also been modelling the potential effects of vaccinating different sectors of the population. A team from the University of Warwick and the London School of Hygiene and Tropical Medicine reconstructed the way that flu spread in several flu seasons (2009 – 2018) by including information about peoples’ infection and vaccination history. They used the model to explore over 1000 different vaccination strategies, involving different groups of people, to see which would be most cost-effective. They confirmed that vaccinating people aged 2-20 – rather than just young children – was very cost-effective in reducing transmission and infections.

Unfortunately, vaccines don’t work well for everyone, particularly people who have a weakened immune system. An NIHR-funded project at Imperial College London is looking at how to improve our response to vaccines. They are interested in T-cells, specialised cells produced by immune systems to fight off respiratory viral infections, but we need to understand more about T cells and how they work. The team of researchers are planning to safely inoculate healthy volunteers with small amounts of either flu or RSV. They will look at the T-cells in the volunteers’ blood and lungs and see how this relates to their symptoms. The researchers hope that by tracking these specialised cells, they can develop a better understanding of how they are generated, so they can be harnessed by future vaccines.

How you can get involved with research

To find out more about research trials that are happening now and in the future you can search our site for a full list of studies. Perhaps one is right for you?

Our what happens in a study page provides more information on how trials work. And if taking part in a study doesn’t feel right at the moment, there are other ways to get involved in research.

Meet the COVID-19 vaccine volunteers - Be Part of Research

What does Asthma research look like? - Be Part of Research